Why Short Sale? When It’s OK to Walk Away From Your Home!

More Short Sale Informaton From A Certified Short Sale Specialist:
A friendof mine and an awesome lender, Suzanna Ravin, emailed this article to me today and I thought I would share it here on wereheretohelp.org.
It comes from the Wall Street Journal—
–

Millions of Americans are now deeply underwater on their mortgage. If you’re among them, you need to stop living in a dream world and give serious thought to walking away from the debt.

No, you shouldn’t feel bad about it, and you shouldn’t feel guilty. The lenders would do the same to you—in a heartbeat. You need to put yourself and your family’s finances first.
How widespread is this? More than 11 million families are in “negative equity” —that is, they owe more on their home than it is worth—according to a report out this week by FirstAmerican Core Logic, a real-estate data firm. That’s a quarter of all families with mortgages. And for more than five million of those borrowers, the crisis is extreme: They are more than 25% underwater—the equivalent of having a $100,000 loan on a property now worth just $75,000 or less. That’s true for a fifth of mortgage holders in California, nearly a third in Florida and an incredible 50% in Nevada.
Are you in this situation? Are you still battling to pay the bills each month, even when it may make little financial sense to do so?
It’s time for some tough talk.
Stop trying to chase your lost equity. That money is gone. Don’t think like the gambler who blows more and more cash trying to win back his losses. That’s how a lot of people turn a small loss into a big one.
And do the math. Even if you hope the real estate market is near the bottom—it’s possible, but by no means certain—it may still take years to see any meaningful recovery. If you are 25% underwater, your home will have to rise by 33% just to get you back to even.
Is that likely? And over what time period? Even if home prices rose by 5% a year from here, that would still take six years. And during that time you could instead be building fresh savings elsewhere. 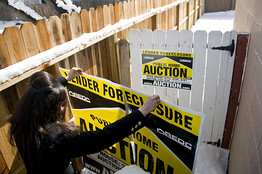 Contact Us Today at the Sacramento Short Sale Center

If you are reluctant to give up on “your” home, realize that it isn’t “yours.” If you are in negative equity, it’s the bank’s home. You’re just renting it. And right now you may be paying way above market rates. You need to be ruthless about your cash flow.
Are you worried about the legal consequences of walking away? Certainly, you should check with a lawyer before doing anything, but the consequences will probably be more limited than you think.
In “non-recourse” states, the mortgage lender may have no right to come after you for any shortfall. They may have no option but to take the home, sell it and eat the loss. According to a survey last year by the Federal Reserve Bank of Richmond, such states include negative-equity hot spots California and Arizona. Even in “recourse” states, lenders may have limited ability to come after you. Often they’d have to jump a lot of legal hurdles, and it’s just not worth it for them. They’re swamped with cases anyway.
“In my experience, right now they’re not really going after anyone,” says Richard Nemeth, a bankruptcy attorney in Cleveland. “They just don’t have the resources.”
If you’ve taken smart steps to protect your money, you may be safer still. For example, money held in a 401(k), Individual Retirement Account or pension plan is sheltered from creditors.
Sure, a strategic foreclosure may hurt your credit score. But if you’re in financial difficulties, it’s probably already suffered. And your credit score is not the only thing in life that matters.
Still, when it comes to the idea of walking away from debts, many people are held back by a sense of morality. They feel it’s wrong to abandon their obligations. They don’t want to be a deadbeat.
Your instincts, while honorable, are leading you astray.
The economy is fundamentally amoral.
Sometimes I think middle-class Americans are the only people who haven’t worked this out yet. They’re operating with a gallant but completely out-of-date plan of attack—like an old-fashioned cavalry with plumed hats and shining swords charging against machine guns.
Do you think your lenders would be shy about squeezing you for an extra nickel if they thought they could get away with it?
They knew what they were doing when they wrote your loan. Many were guilty of malpractice, but they pocketed good money and they’ve gotten away with it. And if they thought your loan was “risk free,” how come they were charging you so much more than the interest on Treasury bonds?
If you’re only a small amount underwater on your mortgage, it’s probably the case that you’re going to be better off staying put. But if you are deeply underwater, it’s a different matter.
Whether we like it or not, walking away from debts is as American as apple pie. Companies file for bankruptcy all the time, and their lenders eat the losses. Executives and investors pocketed millions from the likes of Washington Mutual, Lehman Brothers and Bear Stearns when the going was good. They didn’t have to give back one cent of that money when the companies went into bankruptcy.
Limited liability, after all, is one of the main reasons every business from your local dry-cleaner to a major multinational gets incorporated in the first place. They’re not shy about protecting themselves if things go wrong. You shouldn’t be either.
More questions?  Contact Us Today at the Sacramento Short Sale Center