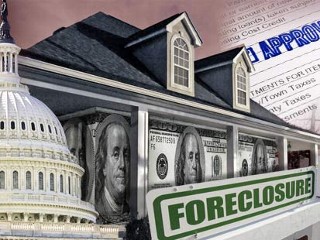 In another (this is the sixth) report to congress, the GAO (United States Government Accountability Office) has made new recommendations to the
Troubled Asset Relief Program (TARP) in a report that focuses on the Department of the Treasury’s (Treasury) efforts to establish its Home Affordable Modification Program (HAMP).

The Entire Report Here:
The first page of the report is an easy read that discusses the Treasury Actions Needed to Make The Home Affordable Modification Program More Transparent and Accountable.

Here is the Report’s Full Page, it gives a great overview of the report and it’s findings:

Under HAMP, Treasury will use up to $50 billion in TARP funds to (1) modify the first-lien mortgages of homeowners in danger of foreclosure, (2) encourage the modification of mortgages in areas experiencing serious declines in property values, (3) reduce or pay off second-lien mortgages for homeowners with loans modified under HAMP, (4) arrange deeds-in-lieu or short sales as alternatives to foreclosure; and (5) provide incentive payments to encourage refinancing under the HOPE for Homeowners program. The first-lien mortgage modification effort is the largest and most developed part of HAMP, and Treasury and its financial agents are establishing the operational infrastructure for this effort. However, one of the requirements under the first-lien program—that borrowers with high levels of household debt agree to obtain counseling—may not fully meet Treasury’s goals.

Specifically, Treasury does not plan to systematically monitor whether borrowers who are told they must obtain counseling actually receive it, in part, because it does not wish to deny a loan modification to borrowers that have demonstrated they are able to make modified payments. Also Treasury does not plan to assess the effectiveness of its counseling requirement in limiting redefaults. The other four HAMP subprograms had been announced but were not fully designed or operational. Treasury announced the $10 billion Home Price Decline Protection (HPDP) program, which is intended to encourage investors to modify mortgages in areas experiencing steep declines in home prices. But, Treasury officials told us that they had not yet developed estimates of the number of modifications that would result from the HPDP, and said that in some cases, the HPDP payments would go to some loan modifications that would likely have been made without this incentive. Because none of the expenditures under HPDP would be recouped, it is crucial that Treasury ensure that funds are spent only when needed to encourage modifications that would not be made without this incentive.

Treasury’s estimate of the number of borrowers who would likely be helped under its HAMP loan modification program reflects uncertainty created by data gaps and the need to make numerous assumptions, and this projection may be overstated. In addition, Treasury has not specified its plans for systematically updating key assumptions and calculations. Treasury announced that up to 3 to 4 million borrowers who were at risk of default and foreclosure could be offered a loan modification under HAMP. But Treasury’s rojection of a participation rate of 65 percent of the target group—borrowers who were at least 60 days delinquent in their loans or in imminent danger of default—which is based roughly on a 90 percent servicer representation rate and a 70 percent borrower response rate, may be high. The loan modification program most similar to HAMP—FDIC’s IndyMac Bank program—has a peak borrower response rate of only 50 percent. Additionally, servicer participation in HAMP has not yet reached the 90 percent coverage rate projected by Treasury, and borrowers cannot participate unless their servicers do. Also, not all homeowners offered a loan modification will remain current on their modified mortgages—further reducing the number of homeowners that may avoid foreclosure through the HAMP program. Lastly, Treasury did not provide detailed information and documentation essential to adequately support its assumptions. The lack of adequate documentation and specification of the assumptions makes it difficult to assess the reliability of Treasury’s estimates and, going forward, may hinder efforts to evaluate how well the program is meeting its objectives.