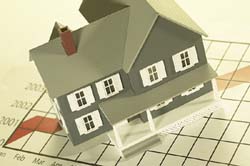 It seems that a lot of the good news about  loan modifications lately have been not based on real numbers, but on assumptions made by the Obama Administration and the Treasury Department… the Home Affordable Modification Program is just getting off the ground and is struggling to get rolling.
According to a story I saw today in DSNews:
The Obama administration’s plan to modify unsustainable mortgages could fall short of its goal, according to a report released last week by congressional investigators at the Government Accountability Office (GAO).
The watchdog agency said the administration’s projections of helping three to four million homeowners lower their monthly payments through the Home Affordable Modification Program (HAMP) “may be overstated” because of assumptions based on uncertainties within the mortgage market and the state of the economy.
HAMP was launched in March. As of this week, 34 mortgage companies have signed up to participate and about 180,000 borrowers are enrolled in three-month trial modifications. The Treasury Department estimates that about 65 percent of borrowers at least two months behind on their mortgage payments will sign up for a federal modification, but the GAO says the actual rate of participation is more likely to be about 50 percent.
Additionally, GAO said servicer participation in HAMP has not yet reached the 90 percent coverage rate projected by Treasury, and borrowers cannot participate unless their servicers do. The report also stated that not all homeowners offered a loan modification will remain current on their modified mortgages—further reducing the number of homeowners that may avoid foreclosure through the program.
Lastly, the GAO said, Treasury did not provide detailed information and documentation essential to adequately support its assumptions, making it difficult to assess the reliability of the Department’s estimates and may hinder efforts to evaluate how well the program is meeting its objectives.
In its report, GAO recommended the Treasury Department:
1) Consider methods for monitoring compliance with and the effectiveness of its counseling requirement.
2) Reevaluate the basis and design for the Home Price Decline subprogram announced in May.
3) Regularly update assumptions and projections underlying the estimated number of borrowers likely to be helped.
4) Staff vacant positions within the Treasury’s Homeownership Preservation Office, and evaluate its staffing levels and competencies.
5) Finalize a comprehensive system of internal control over HAMP and the $75 billion to fund the program.
6) Systematically assess servicer’s capacity to meet HAMP’s requirements during their admission to the program.
The Treasury said it will consider GAO’s recommendations as it moves forward. In response to the agency’s report, Herbert Allison, Treasury’s assistant secretary for financial stability, acknowledged that the Department faces challenges in accurately estimating how many homeowners the program will reach. He said the government intends to update estimates of HAMP’s cost and participation projections.
Foreclosure and delinquency rates have reached their highest levels in 30 years. And the GAO’s report comes amid concerns that servicers are not meeting all requests from HAMP-eligible borrowers and do not have the capacity to handle unprecedented numbers of distressed homeowners seeking assistance. Some have also suggested that lenders may be violating the rules of the program.
Diane Thompson of the National Consumer Law Centertestified before the Senate Banking Committee earlier this month that several mortgage servicers participating in HAMP are demanding payments from homeowners before reviewing their cases, denying help to homeowners not already in default, initiating foreclosure proceedings before completing mod reviews, and providing customers with false information.
Sen. Christopher Dodd(D-Connecticut) has asked regulators to look into accusations that mortgage companies are obstructing efforts to keep people in their homes. In a letter to Treasury Secretary Timothy Geithner and HUD Secretary Shaun Donovan, Dodd said, if true, “abuses of this kind threaten to undermine the effectiveness of the HAMP program and deny the relief on which so many Americans are depending for their financial stability.”
Share